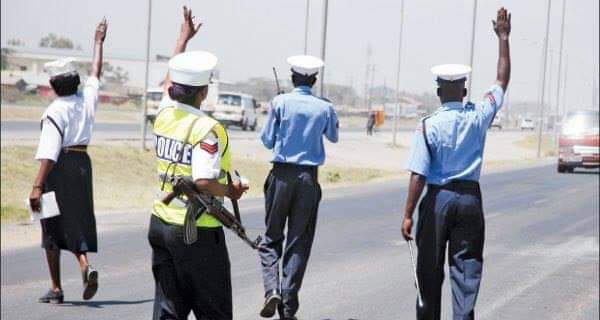 A daring Kenyan man has left everyone talking after stealing traffic police bribe money at a police check point along Nairobi to Meru Highway near Kathegeri Shopping Centre.

The dare devil robber made his way to a nearby thicket with the bribe money leaving the traffic officers dumbfounded.

The traffic police who were manning the road block in Embu, lost all their bribe which was hidden in a thicket.

The clever young man noticed where the money was being hidden and in a flash took it and took a run onto a steep hill.

The policemen allegedly could not even run for more than a minute. Helplessly they just shouted unmentionable words to the young man as he disappeared to enjoy his new found stolen riches.

According to witnesses, the man emerged from the bushes and grabbed the officers’ stash before he ran across the road and disappeared.

This was a daring Kenyan thief witnesses say.

He perfectly timed the location where the officers kept the “loot” before snatching it and disappearing into the thickets.

“There are these steep roads that connect to the road, and the spot where the officers were based is shaped like a wedge. That is the road the young man used to escape,” a witness said.

Kenyans online are hailing the thief who robbed traffic police officers of bribe cash as a hero.

One Kenyan Simon Kimani said that “We are demanding for a public holiday in honor of this hero state recommendation award needed ??”

Kevin Walker said that ” I’m communicating to MP for the road to be named after that man. Keep tuned”.

Job Baruga said he feels for motorists that came afterwards. ?????

Argwings Abuto says the traffic police officers should report this incident at a police station and investigation launched how their fortune was stolen.. ??

Dennis Kapingazi says that at least Embu tumesikika for the first time with great achievement. Kudos to that gentleman.

Owen Juma said that these are the positive effects/outcomes of last week’s Men’s Conference.

Macharia HM said that he was fighting corruption on the ground literally.

Katrina Jones: This are the unsung heroes,whom should be given presidential award….

What are your thoughts on the traffic police, “bribe” thief ?