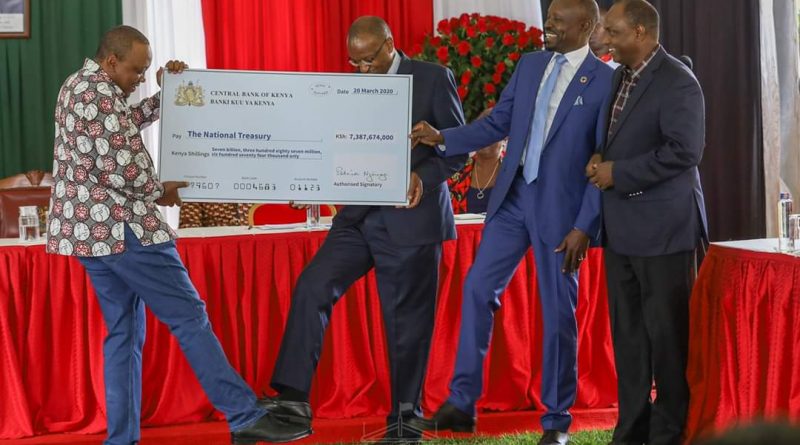 The Central Bank of Kenya (CBK) has today 20th March 2020, released Shs 7.4 billion to support Government efforts to contain the spread of Coronavirus in the country.

Speaking at State House, Nairobi, during President Kenyatta’s meeting with the private sector, CBK Governor Dr Patrick Njoroge said the money was gained from the mop-up of the old 1000 shillings bank notes.

“As you recall in September last year we concluded the demonetization of our currency relating to our old generation one thousand bank notes. That matter was concluded and as a result of that, Shs 7.4 billion worth of bank notes never came back to the system.

“That money would have been held by people who, for whatever reason, did not want to subject themselves to the checks that were in place. So most likely this was money that might have been illicitly acquired through the various channels that we have talked about in other forums,” the CBK Governor said.

Dr Njoroge said the bank is giving back the money to boost the government’s efforts to combat the Coronavirus pandemic.

President Kenyatta thanked CBK for the contribution and directed Treasury Cabinet Secretary Ukur Yattani to ensure the money is used to support Kenyans to overcome the current health crisis.

“That money goes to help our health facilities and our health workers,” the President said.

He added: “That again is something we appreciate and this is what I mean when I say Kenyans working together can achieve miracles.”

During the meeting, the President announced a further Shs 1 billion allocation by the Government for hiring of more health workers needed to increase the country’s capacity to deal with the Coronavirus pandemic.

He said the additional funds will ensure the government brings on board enough manpower to support those already in the field working to save lives.

The President’s meeting with the private sector representatives discussed a raft of other measures being taken to cushion the country from the effects of the Coronavirus pandemic.

Key among the interventions is an announcement by the Head of State that outstanding VAT refunds and pending bills would be settled within 30 days.

“Critically, we all recognize that the volume of business has gone down. We need to ensure that we have cash flow to be able to keep ourselves afloat as we go through these trying times,” the President said.

He said the Government had lifted a ban on its entities from holding conferences and seminars in private hotels so as to keep the hospitality sector vibrant.

“As you are well aware we had put a ban on government officials holding meetings in hotels and said only government institutions are the ones to host various seminars by government.

“Again we have lifted that temporarily until this is over so that our hotel beds get occupancy and you in turn are able to keep your workers employed,” the President said.

Once again, the President thanked the media for its leading role in information dissemination and public health education on the Coronavirus pandemic.

He said the media had distinguished itself as a valuable partner in efforts to contain the spread of the virus.

Following yesterday’s directive, the Head of State said the Government had released 400,000 litres of ethanol, impounded by the multi-agency team on contraband goods, to oil companies for the blending of hand sanitizers to be distributed free of charge to the public.

On its part, the private sector, through the Kenya Private Sector Alliance (KEPSA) Chairman Nick Nesbitt and CEO Carole Kariuki, committed to continue protecting Kenyan employees against job losses and safeguarding SMEs from the adverse effects the current crisis by ensuring business and supply chain continuity.

The private sector further committed to prioritize the health and safety of employees, communities and health workers through increased Corporate Social Responsibility activities.

The meeting was attended by several Cabinet Secretaries among other senior Government officials.

Earlier, the President held talks with representatives of the Export Processing Zones (EPZ) Apparel and Textile Sector during which he commended the sector for their efforts in minimizing job losses during this crisis period.

Today 727 people have tested positive for the virus, from a sample size of 4,913 tested in the last 24

Foods to boost your immunity against the Covid-19 virus