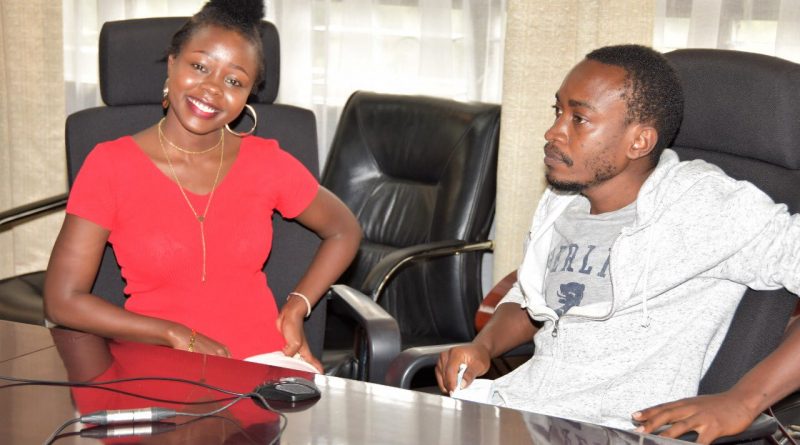 President Uhuru Kenyatta has held a virtual teleconference meeting with Health CS Mutahi Kagwe and the first two coronavirus patients now known as Brenda and Brian who first tested positive of Coronavirus and have since recovered from the virus.

President Kenyatta virtual meeting with recovered coronavirus patients
President Uhuru Kenyatta: I apologize to all Kenyans for excesses that happened during implementation of the curfew. I assure you, if we work together & understand that this problem needs all of us, we will overcome.

Brenda (Formerly patient 1): I went to the US in December 19th I landed in Texas, when I finished my stay there I took a flight from Cleveland in Ohio to Chicago where I had some interactions with certain people from there I took a flight to London. From London is where I think I may have contracted the virus in London or on the plane back to Nairobi. I had a cough 3 days on landing into the country monitored my body for a day and went to Mbagathi Hospital the following day as I had seen it being an isolation centre.

Brenda: I have been in quarantine for 23 days. I thank the nurses for taking care of me very well. I assure all Kenyans that COVID-19 is manageable and treatable.
President Uhuru Kenyatta: She is no longer Number one. Her name is Brenda. Thank you Brenda for saving lives.

“You are special because upon arrival and feeling that you, were not well, without being pushed you took it upon yourself realising that you had the risk to harm others and take yourself to KNH,” Uhuru said to Brenda.

RECOVERED CORONAVIRUS PATIENT
Brian: I got the virus through Brenda (formerly patient 1) Immediately Brenda’s results came in, I was taken as active contact. The Government reacted very fast and came for me from where I was and have treated me for 2 weeks.

“You can recover from COVID-19,” President Uhuru Kenyatta assures Kenyans in a video conferencing call with two recoveries Brenda and Brain at Afya House today.

Ministry of Health Statement: Ivy Brenda Cherotich and Brian Orinda who have been receiving treatment for Coronavirus disease at Kenyatta National Hospital isolation ward were today discharged after being declared free of the disease.

The duo came to Afya house shortly after discharge and were in very high spirit. They called to Kenyans to comply with the government directions to enable the country fight the disease and to avoid stigmatization.

The two later held a virtual meeting with President Uhuru Kenyatta. In the presence of the Health Cabinet Secretary Mutahi Kagwe.

Ivy Brenda Cherotich the patient who tested positive for corona virus disease 22 days ago was today discharged from Kenyatta National Hospital isolation ward after she was declared free of the disease.

Brenda was confirmed to have the disease after her trip from the United States of America has been receiving treatment from health workers at Kenyatta National Hospital.

Brenda said she was grateful to God for the healing and at the same time called on Kenyans to heed the Ministry of Health guidelines so as to defeat the disease.

She asked Kenyans to avoid negative information that is being peddled in various media platforms saying that people need to have positive attitude and support those who are affected.

Brenda was accompanied by Brian Orinda who was also released today from the same ward.