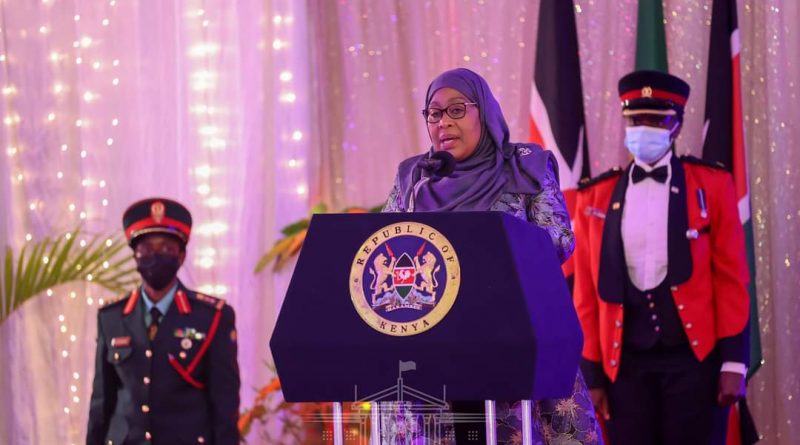 President Samia Suluhu Hassan of the United Republic of Tanzania has said her visit to Kenya is aimed at cementing historical friendship and brotherhood that exists between the people of the neighboring countries.

Speaking during a State banquet hosted in her honour by President Uhuru Kenyatta and First Lady Margaret Kenyatta on Tuesday evening, the Tanzanian Head of State stressed that during her era of leadership, she will strive to strengthen historical ties that exist between the two countries especially in economic cooperation.

“As you are aware in the current world, relations between nations are based on economics. All other issues will naturally fall in place because of our blood relations but economically we need to lay out sound policies to build strong economies,” the Tanzanian leader said.

She said during their private talks with President Kenyatta, they agreed on the need to create a conducive environment for the private sector to thrive and participate fully in economic development.

“Investments from Kenya to Tanzania are largely good. We have about 513 Kenyan companies in Tanzania but from Tanzania to Kenya we have only 30 companies. Now when I go back I will urge more Tanzanian investors to come in and set shop in Kenya so that we can improve on our economies,” President Suluhu said.

She expressed gratitude to the Government and the citizens of Kenya for standing with Tanzania when the country lost its fifth President the late John Pombe Magufuli.

“I have come to Kenya for three main reasons. First is to thank you. As you are aware on March 17th we were bereaved nationally and our brother (President Kenyatta) walked with us every step of our mourning. It was not only him, we also received many condolences from Kenyans saying, ‘our Magufuli has left us’. And with this I knew Magufuli was loved in all of East Africa, in Kenya, Uganda as everyone kept saying, ‘our friend Magufuli has died’,” President Suluhu recalled.

President Suluhu said the decision by President Kenyatta to attend the State funeral of the late President Magufuli was a sign of true brotherhood, which demonstrated care and love for Tanzania.

She said her other reason for visiting was to introduce herself, saying Kenya was among the first countries to recognize her as President after she was sworn-in following the death of her predecessor.

President Suluhu expressed gratitude to President Kenyatta for encouraging her to be strong and take the mantle of leading Tanzania.

“I have also come to introduce myself to Kenya since immediately after the death of our President, I took over the leadership as stated in our constitution, that the Vice President takes over as Head of State when the President dies in office. This is why we had smooth transition from one President to another because we honour what our constitution says.

“Immediately I was sworn-in as President, my brother called me and even when he attended the state funeral he told me, ‘ Samia you have no reason to fear to lead this nation because you have been mentored well by Magufuli and there’s nothing that you don’t know,” she recalled her conversation with President Kenyatta at the time.

She said that it was with those words of encourangement from President Kenyatta that keeps reminding her of the strong bond of brotherhood and comradeship that exists between Kenya and Tanzania.

“From the onset I had the desire to visit Kenya, in order to strengthen our brotherhood and neighbourhood for the improvement of our citizens. Tanzania and Kenya are neighbours but our neighbourliness and brotherhood is not as a result of the waters of the India Ocean or Lake Victoria, rather we are also blood brothers. It’s no wonder that we have various communities sharing similar cultures and languages residing inside these two countries,” President Suluhu said.

On his part, President Kenyatta assured her guest that Kenya will continue to work with Tanzania to achieve the vision of full regional integration held by East Africa’s founding fathers.

President Kenyatta thanked the Tanzania Head of State for accepting his invitation saying her gesture demonstrated her desire to continue improving and strengthening good neighbourliness.

“To us Tanzanians are not just neighbours but rather they are our brothers. I have no doubt that our sister President Samia Suhulu will continue with the position which her predecessors took just as I will also do so to improve our relations between our citizens as all that is required is to ensure our brotherhood lasts,” President Kenyatta said.