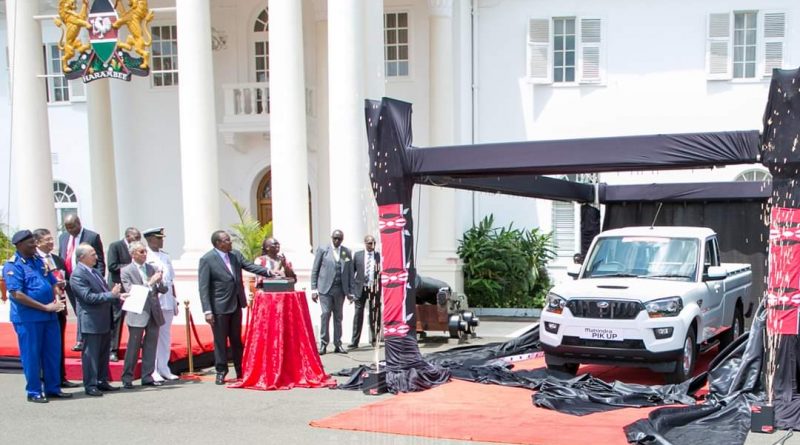 The Mahindra Scorpio Single and Double cabin pick-ups were assembled at the Associated Vehicle Assembly (AVA Kenya) plant in Mombasa.

The Mahindra Scorpio Single and Double cabin pick-ups were assembled at the Associated Vehicle Assembly (AVA Kenya) plant in Mombasa.

AVA is a wholly owned subsidiary of Simba Corporation Limited.

Speaking during the launch, President Kenyatta directed the National Treasury and the Kenya Revenue Authority to immediately institute actions aimed at reducing taxes for vehicles that are fully assembled locally.

The Head of State asked motor vehicle assemblers, in consultation with the National Treasury and the Ministry of Industry, to work out a mutually agreeable framework that will ensure the benefits accruing from the tax incentives are passed on to the consumer.

With the launch of the two vehicle models, President Kenyatta said Mahindra Motors has joined the list of globally renowned automotive brands that have chosen Kenya as their home.

Other global automobile brands that are locally assembled in the country include Toyota, Peugeot and Volkswagen.

The President emphasized that his administration has prioritized the local assembly of motor vehicles as a means of creating jobs and enhancing technology transfer.

“I shall continue to provide incentives to expand this sector,” the President said as he commended Simba Corporation Limited for choosing to expand its investments in Kenya.

“We appreciate your sustained investment in Kenya as it is a vote of confidence in our ever improving business environment.

“This fact has encouraged my administration to continue to make every effort to revitalize the contribution of the manufacturing sector to the economy,” the President told the Simba Corporation leadership team that was led by Group Chairman Adil Popat.

In keeping with the “Buy Kenya, Build Kenya” campaign, the President said the government is promoting market access through preferential procurement of locally assembled vehicles.

“My Government is committed to working together with all players to enhance capacity of the motor industry. I am, in particular, pleased to note the progress we are making in the motor vehicle sector,” the President said.

He congratulated Simba Corporation for the refurbishment of the Mombasa-based AVA to a level of globally endorsed centre of excellence with a capacity to assemble and supply to the East African region.

“This is important to us, as it will create more opportunities for our people through employment, facilitate growth of associated downstream industries and encourage even more investments, not only in this sector but in others as well,” the President said.

AVA currently assembles vehicles for 10 vehicle manufacturers and is certified and endorsed by 20 global manufacturers.

President Kenyatta challenged other sector players to take advantage of the refurbished AVA facility, which is currently producing 10,000 units annually, to increase their production.

He encouraged the private sector, not only in the manufacturing sector but across the entire economy, to tap into the ingenuity of young Kenyans and join in conceptualizing and delivering transformative innovations that will help boost the economy.