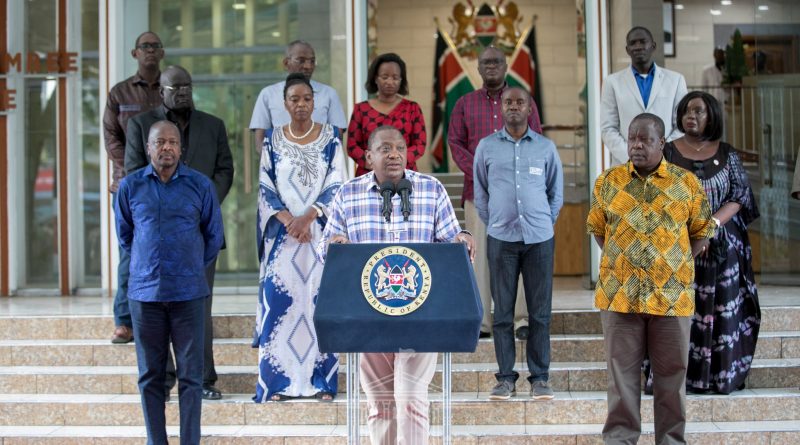 President Uhuru Kenyatta on 15 March 2020 outlined various proactive measures the government is undertaking to contain the spread of Coronavirus in the country.

The President who announced two more cases of confirmed infections, assured the country that the Government is proactively assessing, containing and managing the virus.

To safeguard the public from exploitative traders, the President said severe action will be taken against people found to be taking advantage of the situation to hoard or increase prices of commodities.

“I would like to really emphasize on one point, that we will also equally not entertain hoarding or raising prices to mwananchi taking advantage of this situation to create artificial shortages so that mwananchi is made to pay more.

“The Competition Authority has already been given clear instructions and they will be moving around and anybody who is seen to have taken unnecessary and undue advantage of this particular crisis to make our citizens pay more than they should, serious and severe action will be taken against perpetuating that vice,” the President said.

President Kenyatta spoke this evening at Harambee House in downtown Nairobi when he addressed the nation on the Coronavirus outbreak.

The President regretted that some of the measures taken by the Government may cause inconvenience saying that the interventions are designed to ensure that the spread of the virus is contained.

“I appeal to all of us to strictly observe these measures. I would also like to appeal for calm. Kenyans must avoid misinformation that causes panic and anxiety,” the President said.

Expressing optimism that the country will overcome the virus, President Kenyatta said every single Kenyan has a responsibility in containing the outbreak.

“Let us remember that as Kenyans, we have been faced with other crises in the past, and we have always triumphed by coming together in the spirit of national unity and cooperation.

“This pandemic will test us, as it is testing all countries in every corner of the world, but I do not believe it will defeat us. If we pull together, and everybody does their part, we shall overcome its worst impacts,” he said.

Following the confirmation of two additional cases, the President announced that the Government has suspended entry for all persons coming into Kenya from any country with reported Coronavirus cases.

He said only Kenyan Citizens and foreigners with valid resident permits will be allowed entry provided they take up self-quarantine or check into a government designated quarantine facility.

“This will take effect within the next 48 hours to cater for any passengers who may be enroute. This directive will remain in effect for the next 30 days or as varied by the National Emergency Response Committee,” the President said.

Additionally, the President said all persons who have come into Kenya in the last 14 days must self-quarantine while any person who exhibits symptoms such as cough or fever should present themselves to the nearest health facility for testing.

He announced the suspension of learning activities in all educational institutions with immediate effect.

“Consequently, and to facilitate a phased approach, primary and secondary day schools are to suspend operations from tomorrow (March 16),” the President said.

For those in boarding institutions, President Kenyatta directed schools to ensure that students are home by Wednesday, 18th March 2020 while universities and tertiary institutions are to close by Friday, 20th March 2020.

The President advised government offices, businesses and companies to allow employees to work from home with the exception of employees involved in the provision of critical or essential services.

In order to avoid the risk of transmission through physical handling of money, President Kenyatta encouraged the use of cashless transactions such as mobile money and credit cards.

“We appeal to mobile operators and banks to take into consideration the situation and reduce the cost of transactions during this period,” he said.

Other measures announced by the Head of State include a call on citizens to avoid crowded places such as places of worship, minimizing attendance to social gatherings including weddings and funerals.

We have 278 people that have tested positive from 3,053 samples run over the last 24 hours. This now brings

No KCPE, KCSE in 2020 as Pre-primary, Primary and Secondary schools to re-open in January 2021 – Education CS George Magoha

THE NINTH [9TH] PRESIDENTIAL ADDRESS ON THE CORONAVIRUS PANDEMIC IN KENYA