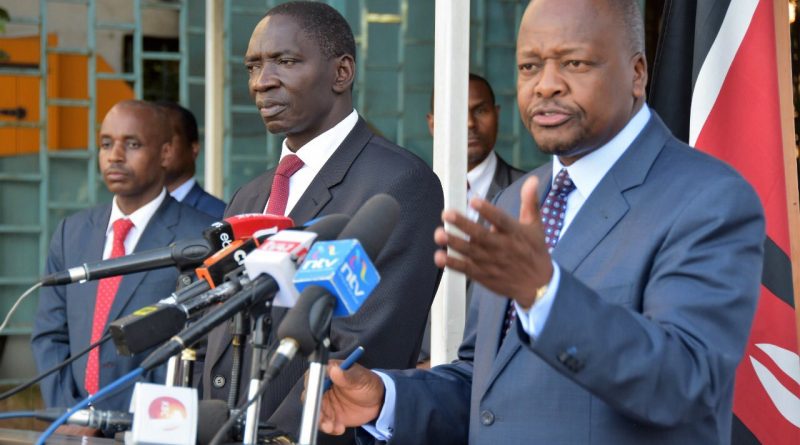 “One more person has tested positive of Covid -19 bringing the number of positive cases to 16″ CS for a Health Hon. Mutahi Kagwe has confirmed in a media briefing of COVID-19 update in Kenya.

The latest case is a close contact of one of the eight cases that was reported yesterday.

CS Mutahi Kagwe: The Ministry of Health working with County Governments have traced 646 persons who had come into close contact with confirmed cases. 96 have been released after a 14-day follow up period. 550 are remaining on the follow up list.

All the patients, except one who is at the coast are in stable condition. 11 individuals are currently admitted at Mbagathi Hospital awaiting test results. #KomeshaCorona update

CS Mutahi Kagwe: The fact that one is screened at JKIA is not enough to say that you do not have the disease… We are tracing those people who might have come into contact with the priest from Siaya.

CS Mutahi Kagwe; Among the people in isolation at Mbagathi is the priest from Siaya who travelled from Rome.

The Health CS Mutahi Kagwe has appealed to the matatu sector not to hike fares, tells operators that people are not in good financial situation.

CS Mutahi Kagwe: We have observed that some PSVs have increased fares to comply with directive issued.We appeal to them not to do so as it will be counterproductive in trying to contain coronavirus.That one sector will punish everyone so as to earn as much as they can is immoral.

CS Mutahi Kagwe: All passengers coming into the country between now and Wednesday 25 midnight must undergo mandatory quarantine at their own cost in government approved hotels or in government designated facilities. We ask these hotels to reconsider their rates.

We are encouraged to note that majority of the people have complied with the measures we have so far announced. We continue to appeal to Kenyans to take the matter seriously and strictly observe the advisories issued which are ALL aimed at containing the spread.