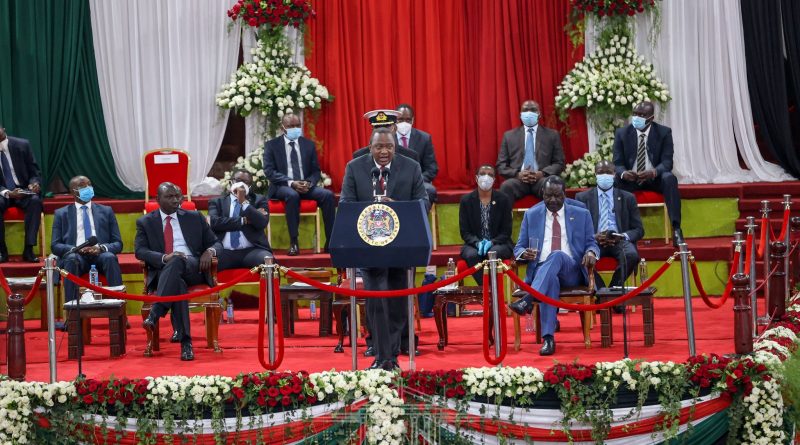 President Uhuru Kenyatta has said the BBI report provides longterm solutions to pressing challenges holding back the country from progress such as disunity, lack of inclusivity and youth unemployment.

In a candid off the cuff speech during the launch of the report at the Bomas of Kenya, the President told Kenyans to focus on fixing these challenges through the BBI process and avoid being distracted by political sideshows.

The Head of State pointed out that Kenya was a highly tribal nation whose politics of negative ethnicity had created a predictable cycle of post election violence since 1992.

“The fact of the matter is we are a tribal society and we want to run from that. Let us not cheat one another. I will also admit that I have been part and parcel of the negative politics.

“That is why we must address the issue of inclusivity so that every single community will feel they are part and parcel of this country,” the President said.

The Head of State explained the genesis of BBI and how his coming together with opposition leader Raila Odinga was inspired by a need to ensure future generations enjoyed a stable, united and prosperous Kenya.

He said his ‘handshake’ with Mr Odinga was a continuation of his coming together with Deputy President William Ruto in the build up to the 2013 elections and that he kept his deputy informed during the entire period of his discussions with the former Premier.

The President refuted assertions that Mr Odinga had joined his administration and thanked the former Prime Minister for showing magnanimity when they sat down to chart the best route to a peaceful, united and prosperous Kenya.

“As you know we were competing in 2017 and as such things got difficult. But when we got through to it and we spoke and spoke again. We agreed that we were not here to share positions. We agreed we are coming together with one common agenda of ensuring that what people of Kenya have witnessed in 1992,1997,2005, 2007 and 2017, Kenyans shall never ever witness again.

“We did not talk about sharing Government and as we stand today he is not in government. He never made any demands at all. He said let us fix what we will be able to enable us to compete without the blood of Kenyans being shed,” the President said.

“We have a youth that if not well managed can be a time bomb and can blow up this country. How we manage it is very important. We cannot manage it through inciting them but by including them in decision-making.

“We must stop this culture of use and dispose and instead develop a program of how we can systematically and in a thoughtful manner, how we can help our youth to be part and parcel of our future,” he said.

On his part, Deputy President Dr William Ruto isolated several sections of the BBI report that he said needed further strengthening and encouraged all Kenyans to participate in the constitutional reform process.

“This is a process where we all can bring our views together. We all have a civic duty as Kenyans to engage and don’t have the luxury to run away. We should try ad have an uncontested referendum,” Dr Ruto said.

Mr Odinga recounted key moments in the BBI process saying proposals contained in the report were representative of the submissions made by Kenyans in a comprehensive national public participation exercise.

The opposition leader said his desire and that of President Kenyatta was to leave a legacy of a Kenyan society where all citizens have an equal opportunity to improve their wellbeing.

President Uhuru Kenyatta left the audience in stitches after saying Ruto was running backwards due to his aggressive ambition to succeed him in 2022.

The head of state said Ruto had forgotten about Jubilee government’s agenda and asked him to take things slow because the time for politicking had not yet come.

“This is a relay and we all know that in such a race, you cannot pass the button to someone who has chosen to run in the opposite direction,” posed the President.

Reportedly, those caught on camera include Mbita MP Millie Odhiambo.

Today being October 26 was President Uhuru Kenyatta birthday ? as he turned 59.

From Newszaleo.co.ke we wish his Excellency President Uhuru Kenyatta a happy prosperous new year full of everything he desires.