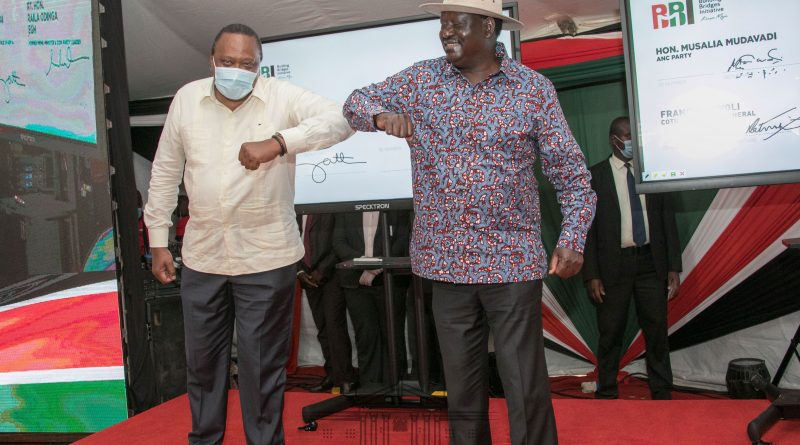 President Uhuru Kenyatta has said the constitutional amendment process being undertaken through BBI process will help fix some of the country’s deep-rooted challenges such as the cyclic post-election violence.

The President said BBI is aimed at strengthening Kenya’s constitutional configuration by amending identified provisions in the 2010 constitution.

“We need to strengthen the 2010 constitution if we are to continue our decades-long journey in seeking to advance the wellbeing of all Kenyans,” he said.
The President Kenyatta spoke Wednesday at KICC in Nairobi County where he and former Prime Minister Raila Odinga launched the exercise of collecting signatures in support of constitutional amendments in line with the BBI road map.

“As we embark on the signature collection exercise, we recognise that the exercise of collecting signatures is a continuation of democratic deliberation provided for in the Constitution,” the President said.
He observed that the need to amend the constitution is evident in the never-ending threat of post-election violence and public concerns about its lack inclusivity.
“The reality of life demands constant change if we are to solve our challenges and capitalize on our opportunities,” the President said, warning that constitution rigidity is a recipe for war.
Highlighting some of the progressive proposals in the referendum bill, President Kenyatta said the amendments will guarantee the active participation of women in national development by increasing their numbers in representational institutions including the senate where they’ll occupy 50 percent of the seats.
“This means that they will be in charge of determining how we spend 35 percent of the resources available,” the President observed.
Additionally, the President noted that there is a new mechanism for ensuring greater and meaningful representation of women in the national assembly while retaining the affirmative action in appointive positions.
He said the plight of people living with disabilities and the youth has also been addressed by the proposed amendments by ensuring that they will be adequately represented in parliament.

To ensure that every Kenyan enjoys the democracy that the 2010 Constitution promised, the President said the referendum bill cures the problem of under representation in some areas and introduces a fair and equitable approach to sharing of national resources.
“The BBI proposals will ensure greater public participation at all levels – ward, constituency, county and national government,” the President said.
The Head of State also spoke on the benefits of his ‘handshake’ with Mr Odinga, saying it stabilised the country and provided the opportunity to identify the practical reforms that would strengthen unity, inclusivity, equity and good governance.
On his part, Mr Odinga appealed to Kenyans to come out in large numbers and sign the BBI document in record time so that the process can move to the next stage.
“It is a great time to be in Kenya and to participate in the making of history. In these chapters, we are working on our hopes not fears in search of the unity and prosperity we all desire.
“By appending our signatures today after going through the bill, you are stamping a seal of approval on the process,” Mr Odinga said.
Among the party leaders who signed the BBI document at the launch were Musalia Mudavadi (Amani National Congress), Isaac Rutto (Chama Cha Mashinani), Wafula Wamunyinyi (Ford Kenya), Alfred Mutua (Maendeleo Chap Chap), Gideon Moi (Kanu) and Moses Wetangula (Ford Kenya).