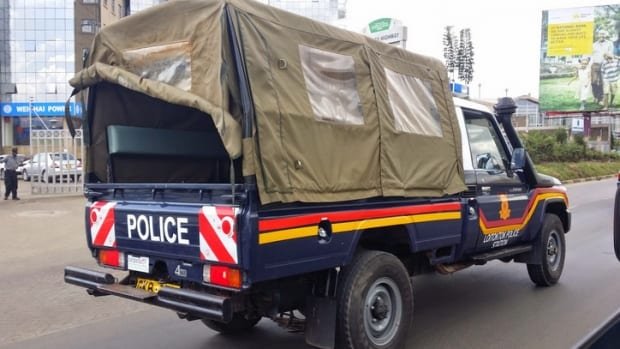 A 24 year old boda boda operator Daniel Mburu has been shot dead today by a police officer manning the gates of Mama Lucy Hospital in Kayole,Nairobi spiking protests from the locals.

Witnesses say that the boda boda operator was rushing an ailing child to the medical facility for emergency treatment when the officer engaged him in an argument for entering the restricted areas of the hospital with a motorbike which then led to the shooting.

Witnesses say the bodaboda operator was denied entry into the premises only for a scuffle to ensue. The officer then pulled the trigger, shooting the man in the chest.

The boda boda rider was ferrying a patient (the child) and reportedly the mother.

The deceased had rushed the child who is said to have drowned at the Korogocho slums.

Tension remains high in the area with heavy police deployment to contain the protests they had to rob teargas to disperse the protesters.
The body of the Boda Boda operator has been moved to the City mortuary.

May his soul rest in eternal peace.

Running battles are happening as police engage Bodaboda operators and residents who are calling for the arrest of the police officer.

Nairobi regional police commander Philip Ndolo confirmed the incident stating that the officer, is said to have “accidentally” shot the man identified as Daniel Mburu had been disarmed as investigations continued.

Independent Policing Oversight IPOA says it has deployed its investigative officers to probe the killing.