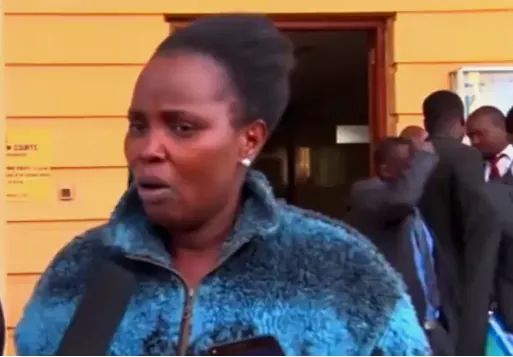 Phyllis Ngirita on a video that has since gone viral as seen by Newszaleo.co.ke is heard crying out loud at Milimani Law courts after the court failed to lift an order freezing her banks accounts.

She could be heard saying that ” she needs to pay school fees for her son who attends school in Gilgil where she now owes the school Ksh3.4 million.
She lamented that her son stopped schooling and can no longer speak German and has now turned into a “Chokora” who can now only converse in Kikuyu and Kiswahili or in English.

I now have to work for my money as all my money is in the NYS frozen accounts and in pending bills.
I plead they release me the money.
My son has been coming to see how am treated every day in court.
The Ngiritas have been used as sacrifice she claimed.
I would like to ask the President , the list of NYS suspects would fill the SGR, but where are they?
We are suffering being told about 9 billion.
You can’t even go borrow drinking water as people only see 9 billion.
Our vehicles are “rotting away” at the Naivasha police station.
The vehicles were on loans and there is no day they have been talked about.
Now I have to use a matatu with my child as I go home while my vehicle “rots”away at the police station.
I would like the President to request for the NYS list because it had so many people but it’s only the Ngiritas who are the sacrifice.
My child is in class 7 but now has turned into a chokora.
I used to able to make ends meet for myself.
My passport was taken away, I used to receive help from Germany but right now I cannot board any aeroplane for 2 years now.
Our vehicles look like decorations at Naivasha police station despite not knowing how we bought them.
They have exaggerated they are saying all the houses in Naivasha are ours.
What kind of life is this we are going through?
All our money is frozen where is 9 billion? ” Ngirita could be heard shouting, screaming and crying out loud for everyone to hear.
Here is the video courtesy of Citizen.