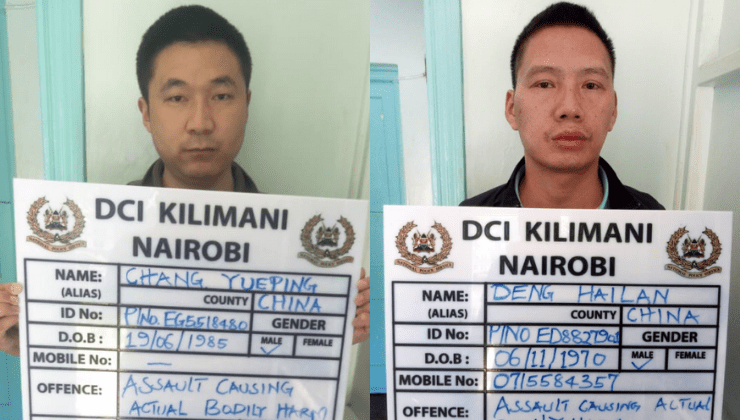 The Chinese man caught on a disturbing video clip canning a Kenyan waiter over the allegations of reporting to work late has been arrested.

The Kenya Directorate of Criminal investigations says detectives from Kilimani raided the Chez Wou Restaurant in Kileleshwa in a tweet seen by Newszaleo.co.ke

The detectives managed to arrest the perpetrator one Deng Hailan, a Chinese National who was working at the hotel as a chef but doesn’t have a work permit.

Yu Ling, a cashier at the hotel holding a visitor’s visa but without a work permit was also arrested.

Eight Kenyans who work at the hotel were also escorted to Kilimani Police Station for further interrogation wrote DCI Kenya.

The latest update today February 13th 2020 is that Interior CS Fred Matiangi has ordered the deportation of the 4 Chinese nationals who were arrested after the video of a Chinese National Deng Hailan caning a Kenyan worker went viral.

CS Matiang’i’s order comes barely hours after a court had directed that the four foreigners be remanded for 15 days pending further investigation.