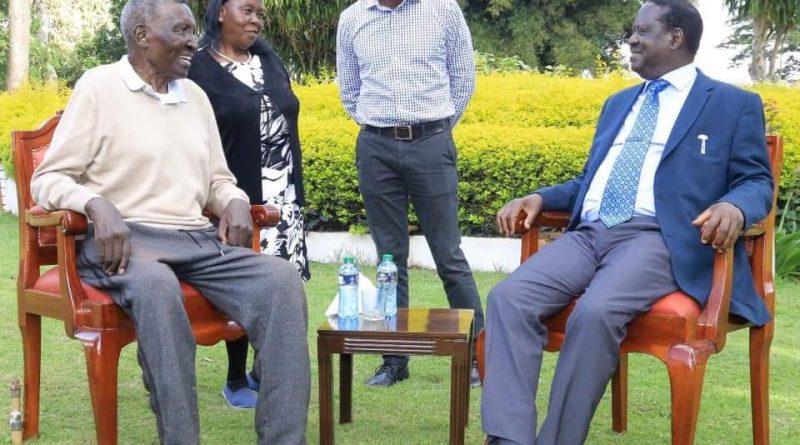 The former Prime Minister Raila Odinga has sent his condolences to the family of the late Nginyo Kariuki in a statement seen by Newszaleo.co.ke

My condolences go out to the family of businessman and politician Nginyo Kariuki who passed on this morning. Nginyo made significant contributions to our struggle for democracy. May the Lord comfort the family at this trying moment, the statement read.

Senator Gideon Moi said he condoles with the family of Nginyo Kariuki who died this morning, says he was bold multiparty crusader and astute businessman.

Amani National Congress Party Leader Musalia Mudavadi has also mourned Nginyo Kariuki saying that “It is with great sorrow that I have come to learn of the passing of Nginyo Kariuki; an astute businessman, a veteran politician who championed for multiparty democracy and on the social front a keen golfer. My heartfelt condolences to his family. May his soul rest in peace.”

Senator Moses Wetangula also has mourned the late Nginyo Kariuki saying “I have learnt with shock and sadness of the passing on our Nginyo Kariuki. He will be remembered for his courageous and relentless struggle for the restoration of multiparty democracy and constitutional reform. RIP”

As seen by Newszaleo.co.ke on 24th February 2020, President Uhuru Kenyatta has sent a message of condolence and comfort to the family, friends and relatives of businessman Lawrence Nginyo Kariuki.

Mr Kariuki passed away this morning at a Nairobi hospital.

In his message, the President described the late Kariuki as an astute businessman and serial entrepreneur whose businesses created thousands of jobs for young Kenyans.

“Kenya has lost a great patriot and a business icon who believed in the Kenyan market. As an entrepreneur, Mr Kariuki’s businesses created thousands of jobs for our youth,” the President eulogised.

Besides his business exploits, the President underscored the late Kariuki’s outstanding support for institutions and initiatives aimed at uplifting the country’s socioeconomic wellbeing.

The Head of State prayed to God to give the family of the late Nginyo Kariuki the fortitude to bear the loss and assured them of his support at this difficult period of mourning.

Mombasa Governor Ali Hassan Joho has also joined in mourning the late Nginyo Kariuki on behalf of the people of Mombasa.
His statement as seen by Newszaleo.co.ke read as

“On behalf of the people of Mombasa I wish to condole with the family of Nginyo Kariuki who passed on early today. The late Kariuki will be remembered for his role in the second liberation of the country.
May the Almighty God give his family comfort during this difficult time. May his soul rest in eternal peace.”

Did you know businessman and politician Nginyo Kariuki? What will you remember him for?
May his soul rest in peace