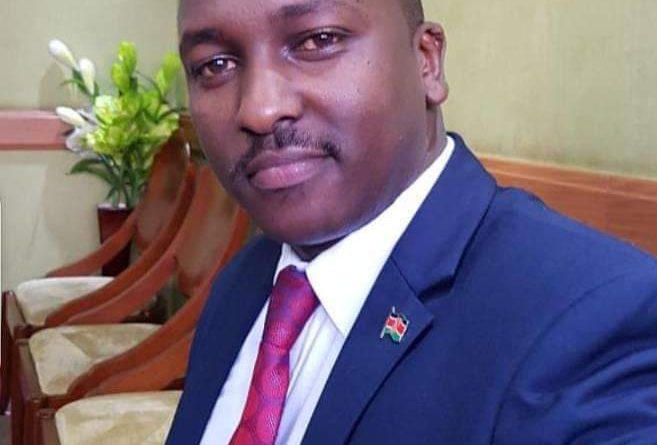 The officer was found with a gunshot wound to the head at his house with the investigations currently underway.

The Police officer was reportedly on duty when former Sports CS Rashid Echesa visited DP Ruto’s office in the KSh 40B arms tender scandal.
The officer was expected to record a statement with the DCI.

He had been missing for two days before being found with a bullet wound in his house. The body has been at the Chiromo mortuary.

Deputy President William Ruto on February 21st 2020, mourned the death of Police Sergeant Kipyegon Kenei who worked in his Harambee House Annex Office as a disciplined young police officer and urged the relevant authorities to conduct a thorough investigation to ascertain the circumstances surrounding his death.
He sent his heartfelt thoughts to the family, colleagues and friends. Rest In Peace.

Kipyegon Kennei police number 224488 left 2 kids one in class 8 and another barely a month old.

Family of the late Sergeant Kipyegon Kenei, a police officer who worked at Deputy President William Ruto’s office, says they heard about the death of their son through the media.

The family has asked the investigative agencies to unravel the truth about his death.

Every time children at Vila Franca’s Twiga Court within Imara Daima saw Sergeant Kipyegon Kenei coming home, they would run after him and fondly call him ‘Uncle Kip’.

It was no secret that he was a police officer, though not many knew he was based at Harambee House Annex, the Office of Deputy President.

Officer Kenei lived in a bedsitter. The room was subdivided into two using a curtain to improvise a bedroom and sitting room just like many other Kenyans who live in the city Nairobi and other major towns.

The late police officer attached to William Ruto’s Harambee Annex office last talked to his wife at around 9.51pm on Tuesday night.

The money sent was higher than usual. The family members tried to contact him but he could not be reached on phone as calls went unanswered and he never replied to messages.

Investigations into the untimely death of police officer, Sergeant Kiyegon Kenei have allegedly taken in a new twist as the family is said to have stated it intended to hire in hiring a private pathologist and lawyer over the matter.

It’s allegedly reported a source from the DCI, speaking to press on Sunday 23, 2020, revealed that the writing on the suicide note allegedly penned by the officer did not match the handwriting in his notebook.

Sergeant Kipyegon Kenei autopsy on his body is expected to be conducted today Monday February 24th afternoon at the Chiromo mortuary.

The deceased officer Kipyegon Kenei attached to DP Ruto office was set to wed on August. May his soul rest in eternal peace.

The postmortem for late Kipyegon Kenei had been postponed after allegedly the Government pathologist Johansen Oduor had failed to show up. His family is reported to have waited at the Chiromo morgue in vain.

A post-mortem report by Government Pathologist Johansen Oduor released on Wednesday 26th February on the body of Sergeant John Kenei has revealed that he was shot killed one or two days before his body was found in the living room of his house at Imara Daima, Nairobi.

Sergeant Kenei died from a single contact gunshot wound a day or two before his body was discovered.

It is yet to be identified if Sergeant Kenei was shot or he shot himself.