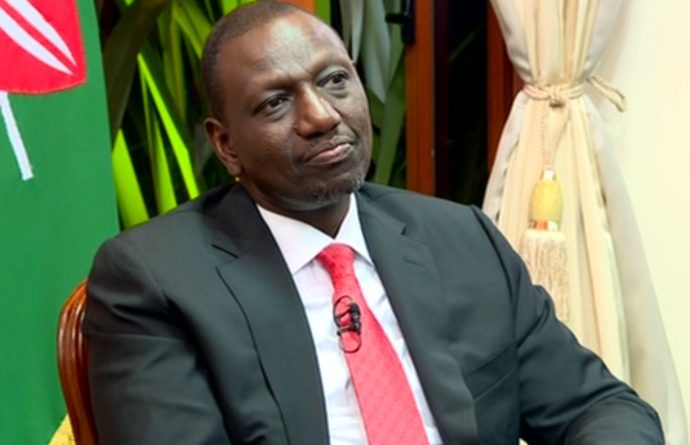 Deputy President William Ruto interview #RutoSpeaks with Nation Media journalist Ken Mijungu trended for the better part of Thurday night as the whole country tuned in to listen to what the DP had to say .

The interview began with questions on whether the Deputy President supports the BBI which with a firm affirmation said yes he does.

The interview got heated up when Ken asked the DP of the alleged reports that the romance and “marriage” that they had with the President seems to be over.

The Deputy President did not mince his words as he cracked up viewers with a funny response that President Uhuru Kenyatta is married to Margaret Kenyatta while him to Rachel Ruto and nothing has changed.

The DP confirmed that the President has not said that he will run for more than two terms neither doesn’t plan on extending his term despite the claims that he is said to be too young to retire.

When asked on his presidential ambitions the Deputy President replied that if he presents himself and Jubilee gives him the ticket, he will run for presidency come 2022.

The DP added that he supported President Kenyatta not because he wanted him to support him thereafter. “One thing that I know about the President is that he is going to support a Jubilee Party candidate when the time comes” added DP Ruto.

Mijungu continued by asking the Deputy President if he believes he will be the one to break the “curse” and succeed a President from being his Deputy to being the newly elected President of Kenya?

This was based on the reference that retired President Daniel Toroitich Arap Moi is the only Deputy President known to have succeeded the President after deceased first President of Kenya, President Jomo Kenyatta passed away.

Boldly DP Ruto responded that it will be a first time for him to succeed the President as the elected President come 2022 despite no one else succeeding a current president besides Moi.

Asked why he believed so? DP Ruto claimed he has a solid track record to show to Kenyans come 2022 since his debut as Eldoret North MP ,Minister of Agriculture later Higher education to to date being the Deputy President of the Republic of Kenya having making tremendous developments in the educational, agricultural and infrastructure sectors.

Ken then proceeded to ask the Deputy President if he would state his net worth to the public?

The DP answer was yes adding that he is the only politician who gets asked that question. Then sarcastically added with a question if the journalist is saying the son of a peasant should not run for presidency?

The Deputy President argued that a 53 year old man of his age is justified to be rich if Mark Zuckerberg the owner of Facebook is a billionaire who is just out of teenage.

Asked on how the situation is at Jubilee, the DP admitted that the Jubilee party has issues but they are not as major as those of National Super Alliance (NASA).

On concluding the journalist posed the question if the Deputy President is a happy man?

Deputy President William Ruto answered by saying that he has participated in seven successful elections and God had been faithful to him.

“I am a happy man I sleep eight hours a night. I do what I can and leave the rest to God”, the Deputy President concluded.