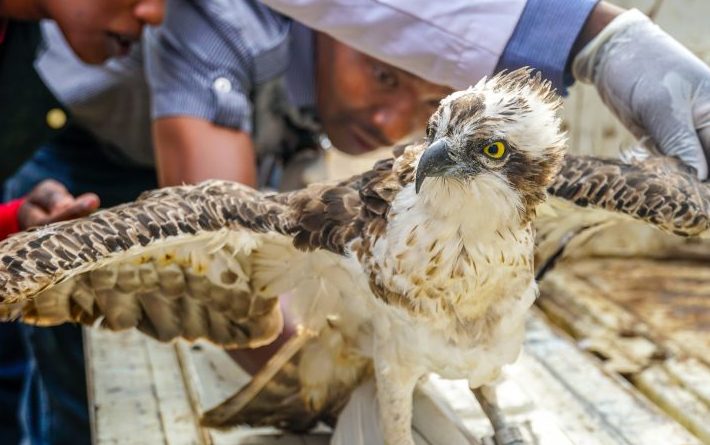 The Kenya Wildlife Service has brought to attention to Kenyans of a rare bird that has since migrated to our lovely country Kenya and was rescued in Lake Victoria, Siaya County.

The bird known as Osprey was ringed as a nestling in Eastern Finland in June 2017 and has reached maturity for breeding.

Newszaleo.co.ke spotted a press release shared by the Kenya Wildlife Service (KWS) that Osprey has covered a total of 6948 kilometers from Finland to Usalu Village in Siaya County.

A member of the community spotted the bird and reported it to the Kenya Wildlife Service (KWS) for rescue from a fishing net in Lake Victoria it had been stuck to.

The net had since caused it some bruises on the legs.

Through contact with its origin, Finish Bird experts advised the Kenya Wildlife Service (KWS) to feed Osprey until it’s totally healed then set him free before it begins it’s migratory journey to the North again in early March.

Taking into account the weighted average cost of imported refined petroleum products, the changes in the maximum petroleum pump prices

ELEVENTH [11TH] PRESIDENTIAL ADDRESS ON THE COVID-19 PANDEMIC IN KENYA