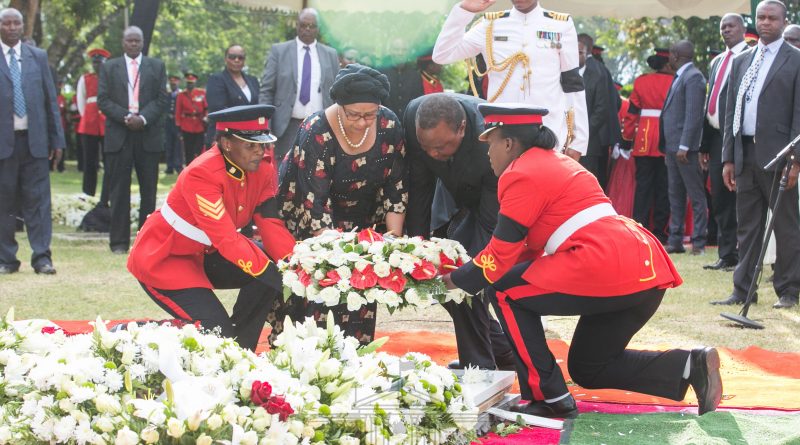 After a six hour burial service at Kabarak University grounds in Nakuru County the procession headed to Mzee Moi’s residence in Kabarak for the final send off.

The late Mzee Moi was honoured with 19 gun salute and military aircrafts flying over Kabarak in aerial salute in honour of the late former President Moi.

The late former President was lowered into the grave as the KDF fired 19 cannons in honour of the man who led the country for 24 years and ensured it remained stable in the midst of turmoil all across Africa. As the cannons were fired Kenya Defence Forces fighter jets performed a flypast.

The 19-gun salute is a symbol of honour to the former commander-in-chief of the armed forces.
The guns are fired in series of five seconds once the body is lowered into the grave.

Mzee Moi has been buried next to his wife Lena Moi , according to his wishes.

Addressing thousands of mourners at Kabarak University grounds, President Kenyatta said he considered Mzee Moi as a father, a teacher and a mentor who was close to the Kenyatta family since the passing away of Kenya’s founding father Mzee Jomo Kenyatta.

President Uhuru Kenyatta said the Government will work with the family of the late former President to ensure the completion of projects initiated by Mzee Moi including a referral hospital in Kabarak for all mission hospitals in the region.

The First Lady paying her last respects to Mzee Moi.